GET MY FREE QUOTE

Our galvanized water tanks are available in nine standard sizes, from 130″ to 512″ diameter, giving you a range of sizes and volumes to suit your home, business, ranch or farm’s requirements. 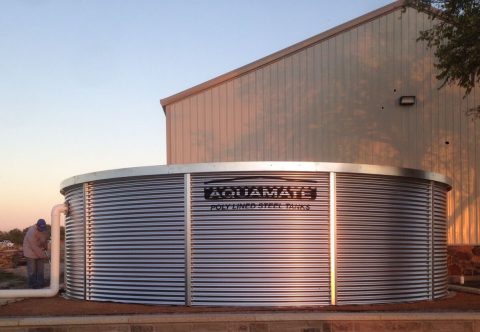 Aquamate galvanized water tanks use a heavy duty galvanized coating on its metal tank shells, in combination with a flexible monofilament polyethylene liner, to provide a durable solution for rainwater storage. 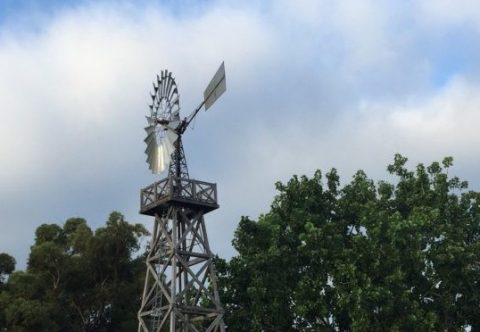 Being maintenance free, Aquamate’s galvanized water tanks are well suited to remote locations. Our galv water tanks can feed directly into livestock troughs or be connected in-line into irrigation systems. 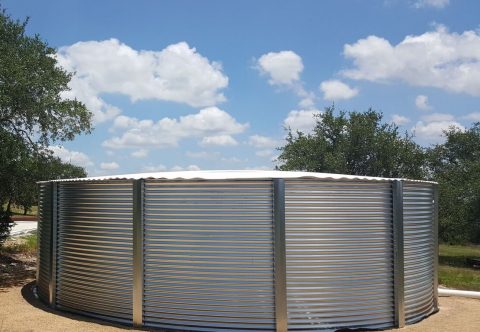 Aquamate’s range of fire water tanks is ideally suited to providing protection for homes and barns in wildfire-prone areas. 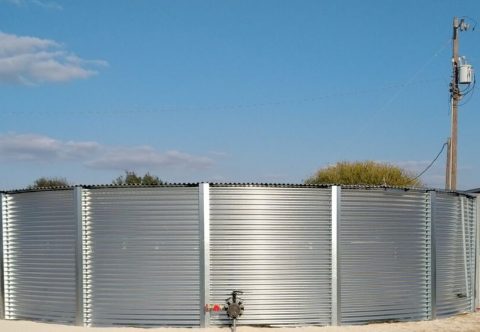 Aquamate engineered large galvanized water tanks are available in a range of sizes and configurations, up to 43′ diameter & 200,000 gallons to suit commercial and industrial fire tank installations.

Why use Galvanized steel rather than Zincalume steel for your tank walls?

Today, there are other suppliers of poly lined steel tanks, many claiming that Zincalume steel will outlast Galvanized materials in this application. Simply put, Aquamate knows this is not true.

When a tank is full, the liner is pressed up against the inside wall, causing condensation to be trapped between the liner and the tank wall. The corrosion to Zincalume steel is inevitable due to the moist conditions & the lack of oxygen (air), which Zincalume steel requires to form its stable oxide films that would normally prevent further corrosion.

For example, Zincalume steel roofing & wall cladding on a barn will outperform Galvanized steel because the steel is able to “breathe” (form its stable oxide films). However, if the Zincalume steel wall cladding comes in contact with the ground rapid corrosion occurs. This is due to the moisture in the ground and the fact that the steel is unable to breathe. That is why steel barn manufacturers use only galvanized steel for the posts which will be buried ie moist conditions and unable to breathe. The same example is found in fencing and all other structures made of steel.

Another reason is because they can offer a range of colors using the same cheaper G40 coated material roofers use when they supply a curved veranda. Aquamate supplies a variety of colors because we have our steel supplier manufacture the more expensive Galvanized G145 material with a colored finish. This material is exclusive to Aquamate.

If you’re still not convinced Galvanized material would outlast Zincalume steel in a poly lined steel tank then we suggest you obtain independent advice. Ask a traditional tank maker, a barn builder, a fence contractor or a corrosion engineer as to why they would use only Galvanized material in an enclosed moist environment.

Aquamate’s ‘No Service Costs’ Pro-Rata Warranty leads the industry and is supported by over 30 years of experience choosing the correct materials to survive the toughest conditions.

Unlike other tanks on the market that use G40 Zincalume tank walls, an Aquamate galvanized water tank will never need servicing or hundreds of dollars spent extending the warranty every 5 years by replacing sacrificial anodes.

By Purchasing a Galvanized Water Tank from Aquamate, you will not need to remember to service your sacrificial anodes every 5 years. In fact, you won't need to service your tank at all for a period of at least 20 years!

GET MY FREE QUOTE

The best kind of Investment is one you don’t have to worry about! Let us provide you with a Free Quote within one business day!

Aquamate’s solid Polyethylene tank liner is incredibly flexible which is an important characteristic needed for a durable water tank liner.

"Very happy with Aquamate, the service and quality were fantastic. Strongly recommend." Shaun Elsworthy
"After my our firefighting water storage requirements changed Aquamate were able to assist by retrofitting my existing Aquamate Tank to meet CFS specifications."